The “Unity of Opposites” in Political Theology: Conservatism, Liberalism, and the Intermediate Zone

The tension between conservatism and liberalism, comprehension of the dangers implicit in the growing radicalization of both, and the role of religion within this constellation together are an invitation to engage in renewed thinking in the field of political theology—political thought based on religious philosophical foundations.

The world, and Israel within it, is embroiled at present in a deep political and ideological crisis. The idea that liberalism would reign in the modern era—a concept that reached its height in Fukuyama’s 1989 declaration concerning the “end of history”—has been proven wrong. Conservative forces are on the rise throughout the Western world, and contrary to the view commonly held in many countries—in liberal circles in the United States, in particular—this is not merely a hitch in the liberal Messianic course but rather evidence of considerable weakness in its vision and implementation.

Major theorists such as Juergen Habermas currently doubt the ability of modern secularism to reestablish its ethical foundations from within and to overcome various obstacles, particularly the ethical failure of neoliberal hypercapitalism. Identity politics, the latest cornerstone of contemporary liberal thought, have eroded the idea of shared good and created a culture of political correctness that masks the lack of solidarity and the fragmentation of human society. When students on American campuses fight for transgender accommodations—a worthy enough cause on its own—instead of for the fate of millions in less privileged US states, for whom the disintegrating financial system has led to a life of despair, suicide, and an opioid addiction epidemic, it is a wake-up call for significant self-examination within the liberal camp. In Israel as well, the liberal camp is wracked by similar shortcomings and must perform a similar process of self-inspection.

At the same time, the downfall of liberalism may involve many intricate dangers. The failure of the liberalism idol does not mean that its foundations, when in a state of equilibrium with realistic conservatism, are not essential for society. Post-liberal thinkers, such as Mark Lilla, express a concern of throwing out the liberal baby with the bathwater, and suggest alternatives for the continued existence of liberalism as well as for its revitalization.

Conservatism in its traditional meaning, despite its healthy community-oriented foundations, included discrimination against broad communities, among them women, as well as excessively limited individual liberties. The shadows of political totalitarianism in the not too distant past, with its basis in separatist nationalism and the worship of power, are a warning sign of the potential for repression and destruction that might be encompassed by unrestrained political conservatism.

The religious issue now occupies a central place in this process. It is customary to argue that since the 1980s the world has experienced a post-secular transition. The basic concept of the secularization thesis, whereby modernization necessarily leads to secularization, has been proven invalid by rising religious conservatism and fundamentalism and the emergence of hybrid models of religion and modernity, for which Israeli society serves as fertile case study material. It appears that God has not died. What’s more, He is reasserting His place in the public, political, and cultural sphere. In this discourse, religion is normally located on the conservative end, although it assumes liberal forms as well. This tension between conservatism and liberalism, comprehension of the dangers implicit in the growing radicalization of both, and the role of religion in this constellation are an invitation to engage in renewed thinking in the field of political theology, i.e., political thought based on religious philosophical foundations.

The kabbalistic and Hassidic “unity of opposites” theory is based on the central theological concept of God’s unity and totality. The idea of God’s unity and all-inclusiveness requires an understanding whereby the duality that assumedly exists in the world is only partial when related to the conception of divine unity, and the action that is necessary with regard to this duality is one of connecting and designating (yichud), “to designate the name Y-H with V-H in a perfect union.” The human role in the world is to implement these designations in practice, by a constant process of creating unity between opposites and revealing their shared roots. Nevertheless, we must also be aware of human limitations regarding the ability to form designations, and it is necessary to distinguish between that which can indeed be repaired and certain human evil traits and political views that cannot be subsumed within this equation (while also finding them reasonable theological explanations, but that merits a separate discussion).

What are the possible political implications of such a religious concept? My main argument here is that the unity of opposites between liberalism and conservatism is not only a current need but rather a goal, an act of a distinctly religious nature. The misconception among many in both camps, whereby the other side—whether designated “fascist” or “Amalek”—represents an absolute political-social-moral otherness, is leading to constant radicalization of views on both sides, consequently endangering the very existence of society and of the community, and in a wider respect, even of the entire world. The current media atmosphere—based as it is on social networks that constitute a type of “sound box” for political views and have nearly no supervisory mechanisms—is aggravating the crisis and diminishing the potential for understanding between opposites or alleged opposites.

How can a unity of opposites be manifested in the political sphere, particularly with regard to issues of Jewish identity, as well as Church and State? And how can it be facilitated? The first step is a process of initial legitimization of the existence and validity of the other side’s views. Contrary to conservative opinion, the liberal camp is not merely a collection of narcissistic nihilists with no morals; rather it encompasses deep and essential elements of freedom and healthy social reasoning. In contrast, the sweeping liberal contempt for conservative thought and the assumption that conservative views are the product of ignorance displayed by those who have not attained enlightenment or the outcome of narrow political interests reflect baseless arrogance.

From a religious perspective, the first act required of both sides embodies the value of modesty and humbleness before God. It is necessary to recognize that our aspiration for political exclusivity and for absolute subjugation of the rival camp is messianic hubris; that the existence of such a wide and developed opposing view is the will of God, and “these and these are the words of the living God” (b. Eruvin 13b).

The second step that must be taken is an intense process that entails clarification and specification of the views advocated by each camp. In order to progress toward a shared societal? vision, it is imperative to analyze the details and understand the actual differences, their underlying premises, and what is essential and cannot be relinquished. This process has spiritual value also in that it enhances each side’s recognition of the true authentic foundations of their views, the vital existential core of their political position. This process separates the wheat from the chaff within the views of each camp and creates the foundations for subsequently forming a shared vision.

The third step is the encounter, the negotiations, and creating a shared political vision that recognizes the essentialness of both views, preserves the inner core of both, and creatively develops unity-oriented solutions. (The unity government is of course a practical manifestation of this idea.) In this regard, it is necessary to also put considerable thought into the facilitating political mechanisms, in accordance with the Hassidic concept whereby “the source of the vessels is higher than the source of the lights.” In order to take this idea forward, there is a need for political decision-making mechanisms that are based not on a majority vote, but rather on a certain level of consensus. There is a need for topical committees that operate on a basis of political balance, supervisory entities, occasional appeals to the public to receive approval and ratification of the proposed moves, and so on.

The main fault of the idea proposed here, and to a certain degree of any political theology that proposes an allegedly higher point of view regarding political reality, is that of power. At any given moment, one side is ahead in the tug of war and believes that its power and strength can ensure it victory and exclusivity. In the case of the Israeli political system, this is at present an acute problem, as due to demographic and other shifts, one side has been in power for a lengthy stretch of time and has no reason to show any willingness to give in to the necessary “subservience.” But this is a dangerous illusion. The growing power disparities are endangering the delicate fabric of society, based as it is on balances between these two forces—the conservative and the liberal. In order to prevail against the political realism of power there is need for a theopolitical realism of spirit, which recognizes the limitations of human power and the danger of constantly striving to attain it and is capable of proposing, realistically and practically without disregarding human weaknesses, a shared, unified, and uniting vision.

David Barak-Gorodetsky is a researcher on the Jewish community in the United States at the Ben-Gurion Research Institute for the Study of Israel and Zionism and at Haifa University and a reform rabbi in the Ramat HaNegev Regional Council. 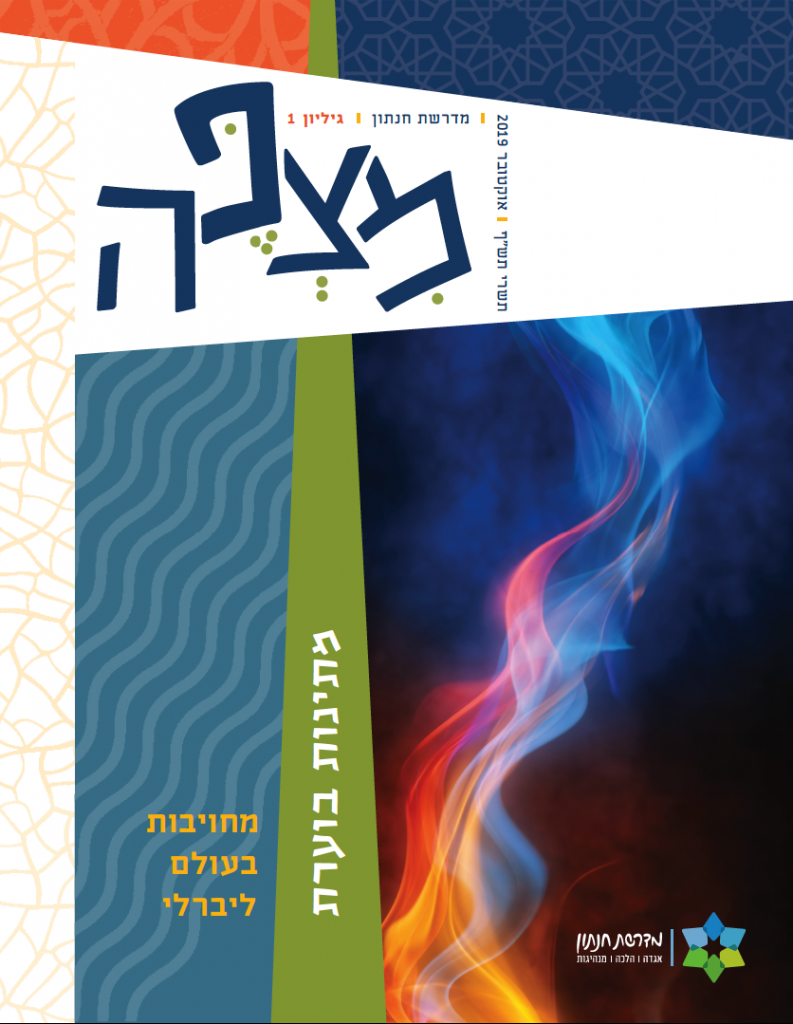